Stakeholder or Citizen; Collaborator or Resister?

In this story about forest protection -http://www.eastcountymagazine.org/fighting-forest-descanso-resident-duncan-mcfetridge#comment-30401- a commenter was puzzled about my silence on what he deemed was the greatest threat to the San Diego backcountry: mega-renewable  energy projects. The commenter was wrong on two counts:   1) Wrong that renewable energy is “the greatest threat that the area faces” and 2) wrong that CNFF and Sofar have been silent about the wind energy debacle.

Allow me to explain.  Any activist group that truthfully takes up good city building and environmental protection in San Diego, the endangered species capital of North America, and tries to scale the Mordorian cliffs of political desolation that tower over the region will be faced each day with a Sisyphean task (http://en.wikipedia.org/wiki/Sisyphus) of unending labor with the Promethean (http://en.wikipedia.org/wiki/Prometheus)  result of having your guts eternally ripped out.

Why do it?  Why not save your guts, collaborate, get a little mitigation and go along with the “authorities”; in other words, why not sit on a fence and be silent?

Truth is that in San Diego we live in the equivalent of occupied territory in which public agencies are steeped in complacency or corruption and where politicians are owned by the special interests dominated by the development industry. It is those very same interests that control the resources that are needed by the sprawl growth industry to spread their tentacles over the land:  The energy, the roads, the water, the land and most importantly the propaganda media machine that in a real community should be regarded as public resources to be conserved and distributed in accordance with the public good are instead treated as commodities to be bought and sold in the market place.  In San Diego we have the politics of a marketplace not a community. The land of happy talk and sprawl.

Thus the Occupiers can glibly and arrogantly run a bill board: “The Great Outdoors. Now For Sale.” 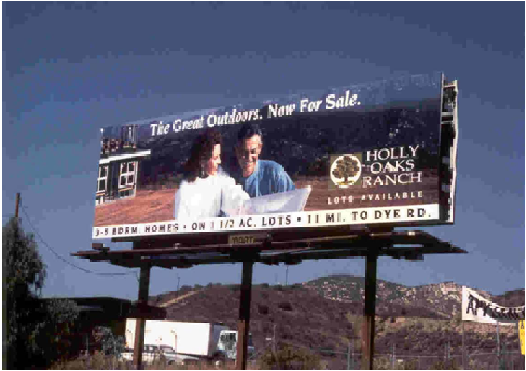 “Bingo”, as George Carlin used to say, “They own you.”

Now if you live in occupied territory, the assaults you face each day are legion. Literally hundreds of agency meetings (local and regional) reports, projects, policy directives coming from the castle of doom.  So, as Sartre so eloquently said when he lived in occupied France, first you have to choose between being a resister or a collaborator and if you choose to be in the resistance you have to select at which level to resist. Politics in occupied territory is war. Click link below to read fascinating psychological/political analysis of choosing between collaboration and resistance.

“The collaborator is a person in search of the security of obedience to values imposed by others. The collaborators so feared their own freedom that they sought to abandon it while refusing to admit their true motives for doing so. If the collaborators drew from German victory the conclusion that they must submit to the authority of the Reich, this was due to an antecedent decision: a decision to defer to the status quo whatever it might be.”

“But to abjure one’s own liberty placed the freedom of all in jeopardy.  As long as others remained free, the collaborator was forced to confront the fact that he might have chosen differently. In his desire to justify his own cowardice, he attempted to reduce those around him to the servile status he had adopted for himself and was thus led to aid his captors in the work of repression.”

The work of repression.  Sound like staff at the board of supervisors, SANDAG, the water board, the energy board, and Caltrans (SSTI Caltrans Review) in their work of commodifying the public resources of land, air, water, transportation and energy for sale to developers like they do in Sacramento(http://www.eastbayexpress.com/oakland/pay-to-play-in-the-state-capital/Content?oid=3836299)?

At SOFAR and CNFF we viewed failure at the regional planning and city building level as the cause of all the subordinate project and resource level disasters.  We reasoned that if we practiced good city building and real planning we could house San Diego’s current and future population in half the land now designated as city/urban and most importantly use half the resources we are currently wasting on sprawl and freeways.  If we had urban growth boundaries like Oregon, we could have beautiful functional cities and permanent protection of forest and farm.

We were not silent on wind energy; we were focused on a different battle that would eliminate the need for so-called wind energy if only we practiced real regional planning.   We gave our full support to The Protect Our Community Foundation,  as evidenced on this letter in 2009: (http://www.cnff.org/documents/SunrisePowerlinkDonationLetter.pdf).

But let’s follow the other trail to what I call the first and greater danger and take a walk with me down memory lane by going to SOFAR.org archives, GPA 96-03, the zoning battle on 400,000 acres of agricultural preserve land in and outside the forest boundaries including the 20,000 acre Guejita ranch. Take a look at the historical record and you will see in essence why we say that San Diego is not only the endangered species capital of North America, but also the capital of political corruption.

And that is why the commenter is fundamentally wrong when he claims that wind energy is the greatest danger facing the backcountry.  The ever present mortal danger facing San Diego citizenry is the massive culture of corruption that permeates every nerve and fiber of the body politic and confronts us every moment with fake choices and fake promises about a better life and instead gives us the real spiritual death of losing our hearts to greed. Having completely lost the dignity of being a citizen in a community we are now referred to as “stakeholders” in the game of commodity roulette where we place bets at political gaming houses (city or regional councils) to get the jump on our neighbor in  “shaping the future” (http://www.sandag.org/uploads/projectid/projectid_428_15908.pdf). That includes every committee, every board, and every agency that pretends in theory that we are a free and rational community ruled by commitment to the public good. The danger in San Diego is the politics of corruption aided by a virulent form of Orwellian smart growth doublespeak and not any particular outrageous project that afflicts a particular part of San Diego.

Not a believer in the above statement?  “Abandon all hope ye who enter here” and follow me like Dante into the inferno of the 96-03 horror story- SOFAR’s lawsuit on the zoning for county’s agricultural preserves.

The judge is about to rule on a moratorium for 400,000 acres of agriculture preserves while the county gets its act together and along comes the BIA to submit an amicus brief claiming, I kid you not, “that a moratorium on agricultural lands would have a "chilling effect" on land subdivision and would be a "devastating blow to the development industry.” Hello folks, did I hear that right, preserving farmland will put a chill on developers! This charade between a completely corrupt county and clean judiciary goes on for a while and finally the judge queries the county if they have a farmland consultant. And lo and behold, the county produces another show stopper: the county farmland advisor turns out to be none other than a lawyer from Pardee Construction!  This is reminiscent of a Pardee director becoming a director of county water authority! http://www.zoominfo.com/p/Mike-Madigan/1099221.

This travesty finally ends with the superior court judge placing a moratorium on the land. The County then appealed the moratorium remedy and was joined by the Pacific Legal Foundation (PLF).  The legal briefs in this appellate case reveal a very interesting debate about San Diego politics and the public good. PLF argued that a moratorium would harm the very foundation of society (i.e. the sacred and unfettered use of private property).  SOFAR invoked a higher principle, namely that "The General Plan laws were enacted with the recognition that 'California's land is an exhaustible resource, not just a commodity, and is essential to the economy, environment, and general well-being of the people (Gov Code 65030)."'

At this point the State intervenes in the person of California Attorney General Bill Lockyer who has this to say about the land in question: “…these (Agricultural Preserve) lands provide habitat for a wide array of sensitive, rare, threatened, or endangered species of plants and animals and play a critical role in maintaining the biodiversity of southwestern California; as a result they represent a natural resource of regional, and even statewide, significance.” Once again, SOFAR prevailed in this policy debate and the appellate court rejected the County and PLF's argument.

The judge after entertaining every possible false argument from the so-called public authorities finally removed land use authority from the county and gave it to SOFAR which authority was held by SOFAR for 7 years. Let me repeat, because the county violated every rule and procedure both political and judicial of a so-called public agency,   the judge of the superior court gave Sofar land use authority on 400,000 acres of private property. Unheard of in American politics! If Sofar, and the judiciary both State and local, had not engaged in this high stakes battle, the agriculture preserves, Geujita Ranch and the forest would have been lost forever.

So in the history of 96-03, when the question arose of whether land is a part of a community and therefore subject to a community plan, or a commodity unregulated except by market forces, the judiciary came down on the side of community and the County came down on the side of land as commodity.  It is in this contest, I submit, that you have the key to understanding, why we have no transit, why we are losing our farmland, losing our forest, losing the energy battle, losing the climate change battle, losing the air quality battle and losing the water battle. You also have the key to the essence of all of our battles – past, current, and future- in San Diego County. You can conserve a public resource but you cannot conserve a commodity.  The great Chief Seattle a century and half ago saw this eternal conflict between greed and justice and said:

“How can you buy or sell the sky, the warmth of the land? That idea is strange to us. If we do not own the freshness of the air and the sparkle of the water, how can you buy them?”

What the county did with farmland as commodity in GPA 9603, the water agencies are doing with water, the energy agencies are doing with energy and SANDAG is doing with roads as commodity in the great climate change litigation in 2012. It is the exact same public/legal  battle on a much greater scale. The development industry represented by a so-called public agency SANDAG is using every possible false argument to delay , divert, and avoid the consequences of” abusing their authority’ in trying to deceive the public about the climate change impacts of their so-called model for the nation sustainable community transportation plan.

To conclude this little tale of resistance and collaboration in occupied territory, the question now comes back to the questioner. When you live in the land of the walking dead and you are on the side of resistance, silence can be strategy.

— 'Those who cannot remember the past are condemned to repeat it.' –Santayana