11-24-14, SAN DIEGO –A California appeals court today upheld a superior court ruling against a San Diego-area planning agency for failing to fully assess the climate and public health risks of a transportation plan that invests heavily in freeways and subsidizes sprawl at the expense of public transit. The decision, by the Fourth District California Court of Appeal, Division 1, confirms that the San Diego Association of Governments, or SANDAG, violated state law by failing to fully account for, and take steps to reduce, greenhouse gases and harmful air pollution in its environmental review of the region’s long-range transportation plan.

Cleveland National Forest Foundation, the Center for Biological Diversity and Sierra Club challenged SANDAG’s review of the transportation plan under the California Environmental Quality Act. California Attorney General Kamala Harris joined in the challenge on behalf of the People of the State of California.

“The Court of Appeal confirmed that San Diego County officials can’t sweep the threat of climate disruption under the rug,” said Kevin Bundy, a senior attorney with the Center for Biological Diversity. “If we’re going to make the changes necessary to avoid global warming’s worst effects, our leaders must be honest with us about the long-term consequences of their choices. California’s extended drought is teaching us that the stakes are very high.”

In addition, the court faulted SANDAG for failing to consider any alternative to its plan that focused on reducing the number of miles that residents drive. CNFF has proposed a transit first alternative called the 50-10 Transit Plan which envisions the completion, in the next decade, of the transit projects scheduled for the next thirty five years for the urban core and the Sprinter and Coaster corridor. To reduce the ongoing and increasing impacts of freeway based sprawl SANDAG must change course and begin investing in complete transit now. 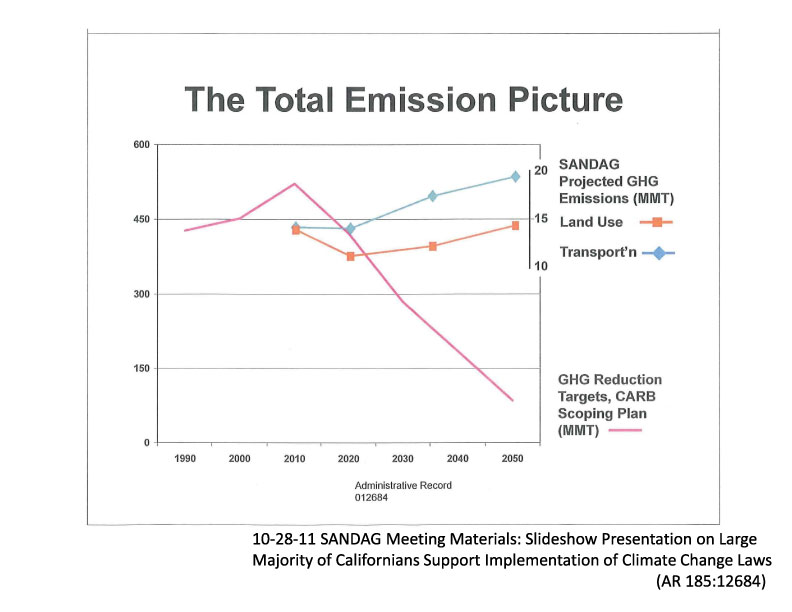 “The Gap”: CEQA targets a major reduction in GHG emissions, while SANDAG’s plan shows a projection of INCREASED GHG emissions.

Why has SANDAG been sued regarding its 2050 Regional Transportation Plan? Simply put, the plan is in fundamental violation of California's CEQA requirements. By failing to disclose the project's inconsistency with the State's long-range greenhouse gas emissions reduction targets, aligned with scientific requirements for climate stabilization, the EIR omitted fundamental information and subverted CEQA's core purposes of ensuring public participation and agency accountability. SANDAG’s 2050 Plan will INCREASE instead of decrease greenhouse gas emissions by 2050.

SB 375 is a California statute enacted in 2008 which mandates that regional transportation agencies (SANDAG in San Diego) coordinate transportation and land use planning in a manner that significantly reduces greenhouse gas (GHG) emissions.

The case is important because it raises the critical issue of which standard should be used to assess the GHG impacts resulting from the 40-year Plan.  While SANDAG based its assessment on measures that calculate short-term effects, the agency ignored what scientists regard as the most authoritative standard for long-term GHG reduction: Governor Schwarzenegger’s Executive Order S-03-05.  This Executive Order calls for 80 percent reduction of 1990 GHG levels by the year 2050.

SANDAG’s refusal to analyze GHG impacts under the long-term standard set by the Executive Order was unlawful under CEQA.  Because of this omission, members of the public and decision-makers were left in the dark as to the long-term impacts of the Plan. As the court explained in its final ruling, the Environmental Impact Report’s discussion of the Executive Order was “impermissibly dismissive.”  Because this Order represents “an official policy of the State . . . [that was] not withdrawn or modified,” SANDAG “cannot simply ignore it.”

Attempting to evade the Executive Order, SANDAG made much of the fact that its Plan had met SB 375’s reduction targets for 2020 and 2035. The court emphatically rejected this argument. It noted that GHG emissions from the Plan — which will remain in effect until 2050 — would dramatically increase after 2035. The court also criticized SANDAG for failing to adopt feasible mitigation for the Plan’s impacts on climate disruption.  As the court put it, “SANDAG’s response has been to ‘kick the can down the road’ and defer to ‘local jurisdictions’” for mitigation.

In its final judgment invalidating SANDAG’s environmental review, the court directed the agency to revise or supplement its EIR in order to properly analyze and mitigate the GHG implications of the plan.

The case is now on appeal. The stakes of this appeal are extremely high. According to a Forbes magazine article, the outcome of this lawsuit "...could set precedent for the state, and possibly, for the country."

The importance of this case is illustrated in the amici briefs filed by some of the top law schools in the nation:

SANDAG has filed a Petition for Review in the California Supreme Court once again delaying climate justice for the San Diego region. In this latest assault on justice SANDAG continues to fail to inform the public and decision makers about the long term impacts of the $200 Billion Transportation Plan/Sustainable Community Strategy.